Employee Testimonial: ‘It’s so exciting what the company does for the employees’ | America's Preferred Home Warranty Skip to main content
May 6, 2022 | By Ada Mbonu
APHW

For IT Specialist Mark, it was a Friday like any other—but with a slight twist. His supervisor Clive, our Head of Technology, had asked him to work out of our headquarters in Jackson, MI, instead of his usual office in nearby DeWitt. As he was handling business in the IT Department, his coworkers were working silently to organize a wonderful surprise.

Everyone was dressed in red, white, and blue for a decoy ‘patriotic holiday’ photo op, and it was all hands on deck as the vice president of operations and several members of the Marketing department set the stage for the big event.

At the appointed time, Clive and Kam from IT escorted him out to a stairwell full of coworkers greeting him with smiles, cheers, applause, and a giant cake! As the first employee of America’s Preferred Home Warranty (APHW) to become an American citizen, there was no way we would miss celebrating such an achievement by one of our own.

Mark was floored the moment he realized the celebration was for him, stating, “I did not expect any workplace to do this. The fact that you guys prepared it for me is really surprising. I shared my citizenship journey with two or three people, and I didn’t expect all this. It’s so exciting what the company does for the employees.”

Mark described the whole occasion as thrilling because, “This is something that my family and I have been working toward for years now—to finally be at that threshold is exciting!” 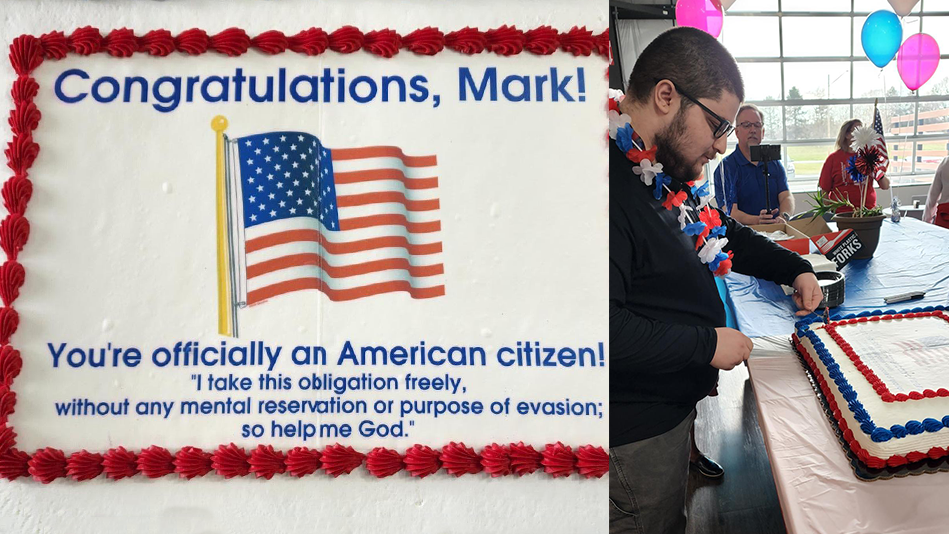 The long road to citizenship

After we took a group photo and surprised Mark with a cake bearing his name and a portion of the citizenship oath, he shared his sentiments about completing the arduous path to American citizenship: Achieving this goal is no small feat. “The citizenship process is not only difficult to prepare for, but it’s also expensive,” Mark stated. “People have to hire lawyers who file the paperwork to get you to the next stage. In my case I didn’t, because my mother is still going through her process, and she knows it up and down. In the end, having her on my side meant I didn’t need a lawyer, which would’ve cost me thousands of dollars.”

Having supportive coworkers makes all the difference

Through it all, Mark has been able to lean on his coworkers. “I’m glad I had the support from everybody, and people who kept encouraging me throughout the process,” he stated. This helped Mark persevere through the most daunting components along the way, like the citizenship test, which he says was, “difficult, because you have to learn all the questions, and the all the answers to the questions.”

Learning that test forward and backward paid off—and Mark will never forget the day he became a citizen of the United States. “The judge shook everybody’s hands and took pictures with everyone, and he said several times that he was happy to be there,” Mark stated. “They said they’re gonna publish the picture, and it’s really good.”

Mark has already registered to vote, and he’s excited to be able to take part in democracy as one of so many kinds of people this country holds. Originally from Russia, he stated, “What I’ve noticed about people in the United states is that we all have different opinions, different eye colors, people from countries all over the world, and we still get along.”

For anyone who is currently on the road to citizenship, Mark wants you to, “Believe in yourself and stay diligent. Even though the process may take a lot of time (years from being a permanent resident to becoming a citizen), you gotta stay on it, keep your goal in mind, and keep at it. In the end it will all be worth it.” Congratulations, Mark!

“I just look at this company today and think—wow.” In 12 years at America’s Pref

IT Specialist Named APHW’s Employee of the Mo...

It’s the quiet ones you have to worry about, right?